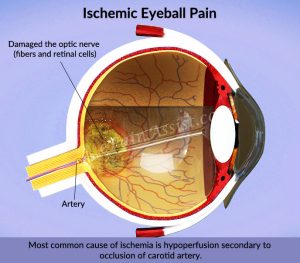 Have you ever heard of OIS (Ocular Ischemic Syndrome)? Hopefully not, because that means that you and your loved ones are not facing this unpleasant and potentially very dangerous condition.

OIS is a consequence of a major blockage of the blood supply to your eye somewhere in the cranial arteries (mostly in the main ophthalmic artery, which is a branch of the internal carotid artery). A person experiences blurry vision that comes and goes, sometimes being accompanied by a headache and/or dull ache and heaviness in the eye. That continues for a while, and then one day momentarily your eye goes blind – and that’s it. Your vision is lost forever.

It’s like an eye stroke or a heart attack, with the only difference that your brain or your heart can often recover, but your eye cannot. The fragile nervous structures of the eye do not have an alternative life support, and if the main eye artery is blocked, they irreversibly die within 30 min.

And what’s even worse, if the blockage is further down the internal carotid artery, you may also experience a full-blown stroke.

Basically, OIS is like a time bomb, which conventional medicine has no means to disarm.

Here is a story that has been sent to us by Warren Cowan, a Home Healer from Australia. We are deeply grateful to Warren for taking the time to tell us about his experience, which can benefit many. 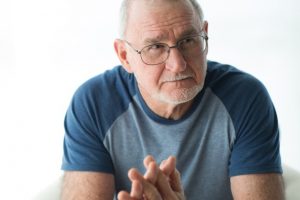 For two to three years the subject had been experiencing visual disturbances which, although off-putting, had not caused too much concern. Then, throughout 2013, following quite strenuous exercise, sight in the left eye would deteriorate, marked by significant loss of acuity and image pigmentation. Duration of this aberration would vary from 5 minutes or so to 45 minutes.

The same was occurring upon waking each morning accompanied by a definite sensation of heaviness to the eye. Similar disturbances would occur randomly during the day unbidden by exercise.

In the latter part of 2014, serious cross-speciality investigation provided the diagnosis – Ocular Ischemic Syndrome (OIS). The subject was informed that the condition was most likely irreversible with likely outcomes of “catastrophic loss of sight and/or stroke”.

At this same time the subject had been treating chronic nose bleeds using a hired Sports Plus SKENAR from a nearby therapist. The subject observed that the visual aberrations previously experiencing following exercise seemed to be occurring less frequently. The visual disturbances upon waking of a morning, however, were just as evident as previously. So, too, were those at other unpredictable times during the day unprovoked by any identifiable activity.

The subject purchased a EX735Ag Slider x2 in September 2014.

Request for support from Dr. Irina Kossovskaia met with an immediate response – a clear protocol to follow.

The subject counts himself particularly fortunate since, not only is Dr. Irina an authority on COSMODIC technology, she also happens to be a well-credentialed and experienced ophthalmologist.

Here, in part, is her response:

“Since we don’t know where the occlusion is located, the agenda would be to improve the cranial blood circulation in general – with an accent on the left eye.

Please, do the Collar Zone protocol every day (Slider in MYO mode) – and also 6 points on the face (COSMODIC Slider Auto mode). Even though it may take some time, I would recommend DOSING all 6 points.

Additionally, Dose the very base of the skull (C1) and “the third eye” point, one after the other – daily. Massage the left temple with the Slider in MYO mode. Do the Pirogov’s Ring technique (in MYO mode) 2-3 times a week.”

The subject followed the protocol to the letter. No change was noted for some days. Then, on the 17th day of following the protocol, there were no visual aberrations upon waking; no visual disturbances following exercise workout. The protocol was working. This early success offered much and led Dr. Irina to make the following suggestion in March 2015.

Let’s try the “Brain Cross” or the “Ear-Brain Balancing”.

The subject had previously purchased both mini and large shungite sphere remote electrodes and so was able to implement the Brain Cross protocol immediately. Dr. Irina provided clear instructions; namely:

Set the EX735Ag Slider x2 to Auto and Energy at a comfortable strength. Let it dose on both positions – or 5 minutes, whichever comes first.

Do this once a day. You can do them all at once since your Slider has two electrodes jacks, or do one pair – then another. Doing it separately is probably better for start.

The subject chose the “all-at-once” technique removing electrodes only when both positions (left/right ear canals & Third Eye/Atlas) had dosed or reached 5 minutes. The Energy setting chosen was A3, which might prove too strong for some but worked well for this subject.

The subject chose to drop the Pirogov’s Ring from the overall protocol. The revised protocol – 6 Points on the Face with the Brain Cross – continued daily through 2015 and to the current date.

The condition was reviewed by the primary ophthalmologist late that year. There were no clinical indications that the condition had progressed. Indeed, it seemed that there were signs that it was lessening. The clinical indicators were less evident. The ophthalmologist expressed skepticism when the subject tabled the EX735AG Slider x2 and demonstrated the protocol. However, he did say, “Whatever you’re doing, keep doing it!”

The latest ophthalmological review (yesterday) found that the OIS has completely disappeared. No clinical trace remains.

The subject intends to continue with the revised protocol program into the future to maintain what has been achieved.

We put Warren’s story here in its entirety, with all details of the protocols that he has been using, for a reason. The very same approach you can adopt and employ yourself for any condition stemming from a chronic poor cranial blood circulation – and there are MANY.

That is not to say that you can “cure” it all, but you can try – and see what happens.

For many such conditions (but not for all), you do not even have to have the most sophisticated COSMODIC devices in order to get great results. Any COSMODIC device will do a good job, if accompanied by the shungite attachments, at least for the Brain Cross technique.

Just work with your Personal Health Assistants regularly, trust them – and trust your own body in its infinite wisdom and its ability to heal itself. 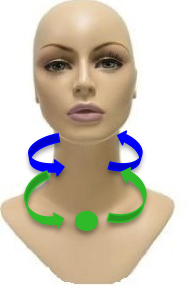 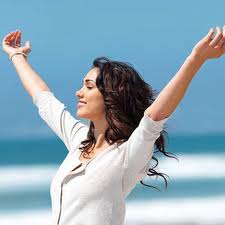 COSMODIC News and EventsCOSMODIC ProtocolsCOSMODIC THERAPYCOSMODIC Training
LET Health
17th April 2018
There are many situations in daily life in general (and in the practice of a holistic healer in particular) when the body is stuck in unhealthy energetic patterns – or a recent encounter created a major disturbance in the energy flow in the body. This may result in fatigue, low energy, ‘foggy brain’, headaches, mood swings,…